The good news is, the next announced sketchcrawl is October 16th.  I may organize one around Salem, MA.  It could be cool.

First, there was this:

– A key thing, help us spread the word!
If you are reading this, we are sure you have a number of friends that might be interested in this as much as you are. Tell them about SketchCrawl! Let’s share this idea with the rest of the globe. No borders.

Those sound reasonable enough, individually, but — in combination — they seem a little too much like corporate rules.

I did a quick check.  So far, the U.S. Trademark Database doesn’t show anything when I search for “sketchcrawl,” so the term “sketchcrawl” is still free to use without trademark-type restrictions.

However, it bothers me that I even thought to do that.

I may have to come up with a new word for these kinds of adventures.  I’m fine with giving the founder credit voluntarily, linking back to the official site, and so on, but… I dunno about this email from them.  Something in those rules feels a little hinky*.

Maybe it’s just the times, y’know?  Maybe I’m being hypersensitive. I’m seeing people staking out their own territory, trying to make money off things that were initially created to be free, fun and cool.  I don’t want to see SketchCrawls edging in that direction. It’d be like someone slapping a trademark on Earth Day.

*”Hinky” is a reference to a term used by one of my favorite characters in the TV show, NCIS, to indicate something that’s not quite right.   (No, I don’t usually watch NCIS. I don’t like crime shows.  However, the character in the show… she’s truly cool.) A sketchcrawl* is a full-day of sketching or drawing in a journal, or on some other art materials such as paper, canvas, etc.

It’s usually part of a stroll, alone or with a group, looking at scenery in one general location.

My advice: Keep your art supplies simple and as light (and perhaps small) as possible.

Here are some ideas for making your own mini-watercolor palette:

And here are the tiniest homemade watercolor palettes I’ve seen, in a 16-minute video: 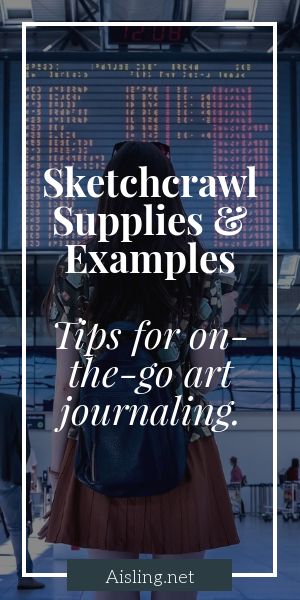 Well, in July 2009, I took part in a sketchcrawl around Boston’s Freedom Trail. (You can see some of my 2009 sketches starting at https://aisling.net/sketchcrawl-notes-1-11-july-09/)

Sketchcrawls are great practice for creating travel journals, too. The materials & techniques are the same, so why not try a sketchcrawl somewhere near your home?

Then, when I travel, I take those same sketchcrawl supplies in my purse or backpack, so I can work on my travel journals on the plane. (Just remember the four-ounce rule on liquids… no big containers of gel medium, glue, or tubes of paint.)

For me, sketching – with pencil, pen, markers, or watercolors – is a relaxing way to enjoy the scenery, wherever I am. Whether it’s a local scene or a trip abroad, art journaling helps me notice – and appreciate – more of what’s around me.

*  At one point, the owner of the Sketchcrawl site claimed that the term “sketchcrawl” was trademarked. Some of us objected to that, since we’d been using the word for a considerable time before he announced his trademark plans. Updating this page, when I checked the US Trademark database, I didn’t find “sketchcrawl” in it. Whew! I’m glad he changed his mind, as – at the time – it caused a rift in the journaling community.

My sketchcrawl day started at about 8:30 a.m. when I arrived at Alewife MBTA station.  I’d been on the road for nearly two hours, so it was a relief to park the car and begin the day’s adventures.

My first sketch was on the train.  I decided to take photos at each sketch location — when possible — to document the day in sketches and photos.

Also, like my travel journals, I kept my receipts in my sketchbook, as well.  You can see one of them, below, on the page facing my first sketch.

I wasn’t entirely happy with the b&w effect of monochrome felt tip pens.  So, when I arrived at the sketchcrawl meetup location (Visitors Ctr at Boston Common), I switched to pencil… and almost immediately regretted it.  I didn’t finish that sketch.

After that, I returned to felt tip pen.  For the line drawing, I was using the waterproof Pigma Micron pen, 08.  However, even though it’s technically waterproof, I let the ink dry thoroughly before adding any color.

The next two sketches — on one page — were drawn from the same location as the previous sketch.  Mostly, I was using up time in case any late arrivals for the sketchcrawl showed up.

After that, I walked up towards the State House, following the Freedom Trail route.  Along the way, I paused to sketch a man walking along a tree-covered path. (The photo was taken after the sketch, when the man was out of sight and a woman in yellow was strolling the same path.)

Next, I stopped at the top of the hill, where a man was setting up his beverage stand.

As I left Boston Common, the State House was glistening in the sun.  It’s both majestic and approachable at the same time.  I like that.

The Shaw Memorial is an amazing work of art, conveying depth with clever use of detailing and perspective.  In shadow, it didn’t photograph well, but I can still remember my mother explaining the art techniques to me, every time we passed this site.

It was time for breakfast, but the nearby BK wasn’t open yet.  I opted for Dunkin’ Donuts… but their credit card machine and ovens were all broken.  I ordered a glazed donut just to have something to eat, but it’s never smart to start the day with that much sugar!

My next stop was the church at the corner of Park Street.  I decided to try sketching it from an unusual angle, looking directly up from the sidewalk in front of its door.

My next stop was the Old Granary Burial Ground.  It has wonderful history, and the light and shadow give it a very timeless quality.

The crowds were increasing, and it was time to find more quiet places to sketch.

King’s Chapel is a lovely old church, and it is still in use for services.  Since it was Saturday, we could visit and spend time sketching.  Suggested donation is $1 to visit, and you’ll receive an interesting brochure explaining the site’s history.

By the time I left the chapel and continued along the Freedom Trail, the crowds had increased dramatically.  It became more difficult to find any place to sketch without blocking foot traffic.

So, I visited a few more locations, and found respite at the Arch Street chapel.  I used to go to church there when I was little, and my mother and I were in the city for shopping or a concert.

After that, I returned to a couple of Freedom Trail sites, hoping the crowds had diminished.  If anything, the sidewalks were more crowded.  At times, I had to step off the curb to keep walking, as tourists stopped to take photos and blocked traffic.

But, everyone was happy.  It was a busy day, but a fun one.  During the day, I think I heard Italian more than any other language, followed by English and then Russian and German.

It was time for lunch, and McDonald’s seemed the simplest — and least crowded — option.

I continued to sketch, and added color to my earlier sketches.  I’d brought all kinds of art supplies with me, but liked watercolor pencils for adding color.

After lunch, the crowds were massive as I approached the USS Constitution.  So, I had to choose between switching to photos or going somewhere else to sketch comfortably.  I chose the former.

These are some of my photos from the remainder of the day.

I love the contrasts in downtown Boston! 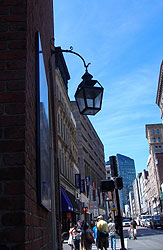 The best $1.70 of the day was spent taking the water shuttle (on the T) from Charlestown Navy Yard to Long Wharf. (The one-way fare is just $1.70.  Really.)  The view — including the Picton Castle photo shown above — was incredible, and the cool breezes were wonderful.

Tip: Get shuttle tickets early if you’re there for a Tall Ships event.  I stood in line for over an hour.  It was definitely worthwhile, but next time I’ll purchase my tickets in the morning, before the crowds arrive.