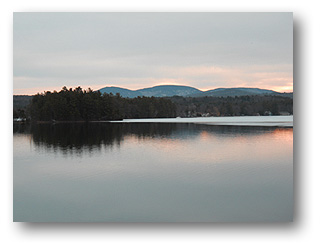 Yesterday morning, I went out to take some photos of the sunrise.  They’re intended as reference photos for future artwork, but some of these may become art prints.

Once I get started on an adventure like this, it can turn into a mini road trip… and that’s exactly what happened.

About three hours later, I was on a hilltop gazing across Lake Winnipesaukee, savoring the view.

This was an amazingly gorgeous start to my day, and it was incredibly inspiring. Every day should start like this!

It also reminded me of the beauty of Nature, even during the start of a “mud season” kind of Spring.

I’d only planned to take few photos at the edge of Lake Winnesquam, shown in the photo above.  It was the first lake I paused at, during my morning adventure.  However, I was soon caught up in the beauty of the sunrise and the fresh breezes predicting more snow.

There’s always a sense of anticipation when the winds shift like that.  For me, it has that same subtle thrill as standing near the top of a magnificent cliff, and the same eagerness of waiting for the next bolt of lightning in a spectacular storm.

So, I continued my morning’s adventures. 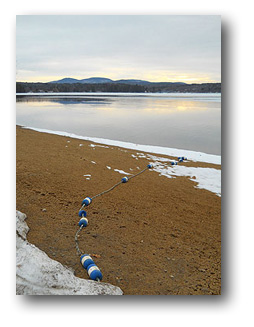 A little further up the road, I discovered a private-ish beach.  It was behind a funky looking seasonal store (closed when I was there, probably for the winter) called Mountain View Manna.  It looks like they sell homemade bread and maybe some crafts.

Since most of the nearby summer cottages were closed up, I felt only a little guilty for trudging up the private (?) dirt road behind the store.

That’s the beach, in the photo on the right.  I may turn this picture into an art print; I think summer visitors might enjoy it.

(If I were a more realistic painter, I’d probably paint this.  For me, it’s a very wistful image showing the lakeside when snow is still on the ground.)

From there, I drove around the lake and soon found Mohawk Island.  (That’s the island in the photo at lower left.  It’s a small, very wooded island.)

I had no idea it was there.  It’s only accessible by water, and it looks very private… and charming.  A couple of buildings suggest that people live there, but I’m not sure if it’s seasonal or year ’round.  There’s something wonderful about the idea of island living. 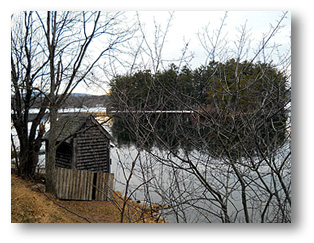 (This summer, I hope to get out to Monhegan Island in Maine, and the Isles of Shoals, off the coast of Portsmouth, NH.  Both are legendary as  art-inspiring destinations.)

Then, I decided to head northeast, back toward Lake Winnepesaukee.

On the way, I stopped at Gunstock Ski Area, where my children had learned to ski.  The area is far more developed now, and I almost decided to take the Panorama lift to the top of the mountain, just to see the view.

Instead, I joked with a few skiers who were there for what may be some of the last great skiing of the season.  (As I’m writing this, another foot of snow is predicted… and falling in peaceful drifts outside my window.) 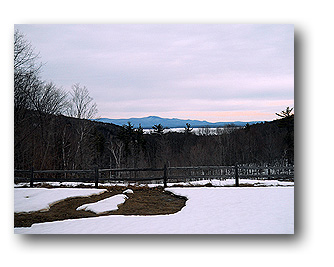 My next stop — before heading home — was on a hilltop overlooking Lake Winnepesaukee.

In the photo on the right, the lake is barely visible between the tops of the trees and the White Mountains in the distance.

The wind was shifting and there was a crisp “bite” to the air, alerting me to the approaching snowstorm.

I wrapped my scarf more closely around my face, and stood there for several more minutes, taking in the landscape.

The colors and the view were breathtaking.  I love how the colors of the sky are reflected in the lilac-tinged snow.  It’s a reminder that subtle colors can sometimes have the most impact.

For me, these photos are partly landscape references. Some of the images will certainly be featured in my paintings.

By the time Spring is here, leaves on the trees will obscure some important details that I’ll want to include in my work.  So, I’m printing several of my best photos from yesterday, and putting them into my art journal… the one I keep as a reference for upcoming sketches and paintings.

However, Nature is also one of the best teachers, revealing how different colors can create different moods.  She’s also showing how contrast and edges can add emotion and interest, depending on whether they’re crisp or soft.

It was a good day, and a reminder that every season is beautiful!

1 thought on “Before Spring – A Photo Essay about New Hampshire”