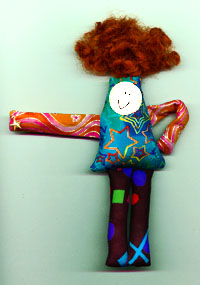 For another art doll exchange (a swap), I decided to modify my earlier “dangerous women” cloth doll design.

I rarely work from a pattern anyway, so any time I decide to repeat a design, it’s not likely to turn out the same as the original.

The photo above is one of a series of six dolls, created in mid-2000.  Most of them looked alike, though no two were identical.

The dolls were each about five inches tall, not including the hair. The bodies were made with preshrunk 100% cotton, the hair was “doll hair” wool, only loosely tugged to give it volume. The face was drawn on with waterproof pens, and then ironed on with Stitch Witchery.

The arms and legs were stuffed before being attached to the body. Then, I added a star charm to one hand on each doll. Finally, I sewed on sheer wings (not shown).

Each doll was machine stitched, except for the final seam where she sits down, and that was closed by hand after stuffing.

All six were sent to the swap, and are now in other people’s homes and galleries, making mischief.

The original pattern, created and scanned as a GIF, can be downloaded here. Be sure to enlarge it to scale.