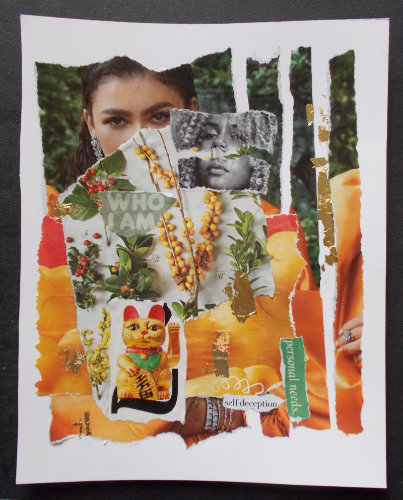 Today’s collage is – like yesterday’s – not quite finished. But, for now, it’s going to sit. I want to look at it for a while, and see what else it says to me. See if anything is missing or needs… something.

That’s a challenge for me, because this isn’t my usual design style.

November 2022 note: I look at this and realize how much it was the product of months of nightly, interrupted sleep during 2020. My art was disjointed during that time. Then, in 2021, I decided that things had to change… and that’s reflected in my later art.

I’m leaving these older pieces online for authenticity. I don’t like this collage, but also know it reflects my struggle in 2020, feeling cut-off from friends and family, as so many of us were, due to Covid concerns.

This piece started with the first layer, showing a smiling model in a tangerine/orange satin gown and an almost ostentatious amount of glittery jewelry.

But – for me – the model’s eyes didn’t match her smile.

Years ago, looking at portraits, I learned to ignore (or even cover) the lower half of the person’s face. The eyes showed the person’s real emotions.

So, as I built this collage, the first thing I did was to cover the lower half of the model’s face. The new layer featured seasonal plants and berries. The colors resonated with the background image, but the texture – and the almost-careless untidiness of Nature – was a sharp contrast.

Suddenly, this collage was about authenticity. The look in the model’s eyes… what is it? Sadness? Distance from everything around her?

That’s when I tore the background image into strips. I chose to apply them randomly, out of order, and with emptiness between them.

Again, that’s a reference to an emerging sense of artifice as I studied the photo.

Next, contrasts and similarities

The next step was to study other magazine photos. I wanted to see if the expression in other models’ eyes were lacking, or at least didn’t match the rest of the face.

When I found the black-and-white image, it seemed perfect. That model’s eyes and mouth, and the tilt of her head, all delivered the same message. I emphasized that by disconnecting them – tearing that image in half. It’s a harsh contrast – in color (b&w), in consistency, and style – against the original layer in this collage.

I began gluing the collage elements in earnest when I found an ad for macaroni and cheese. The colors in that advertisement perfectly matched the orange satin gown. It’s almost difficult to tell what’s macaroni and what’s the gown. And, in contrast with the lifestyle represented by the amount of jewelry in the original image, I also wanted to note the number of people for whom macaroni and cheese – from a box – is considered a luxury meal.

It would be trite to talk about the shallow lives of those driven by status and symbols of wealth, but – as I kept working on this collage – the reference was almost unavoidable.

The words “who I am” are almost lost in the busyness of the design. “Personal needs” is slightly tilted, as much of the rest of the images is. And then there’s the crisp statement, “self-deception” in black and white, with a childish scribble leading to it.

The final elements – the heavily made-up “lucky cat” (Maneki-neko) and ragged gold leaf – fit both the color & theme of this piece.

In some ways, this collage lacks drama, deliberately. It’s less visually appealing than what I usually aspire to, with my art.

But, at a time when – wearing masks – we rely so heavily on the emotion expressed with one’s eyes, and we’re witnessing a stunning, rapidly expanding gap between the “haves” and “have-nots,” I’m pleased with the statement of this piece.

In a world where things can feel tumultuous and destabilizing, maybe authenticity is the touchstone… the sense of self that keeps us grounded.

Able to achieve what we’ve always suspected we can do.

And, once again drifting into irony, I’m remembering the song lyrics in “Grease.” Perhaps – more than ever, as we choose our personal paths to the new “normal” – it’s time to believe that we can be who we are.