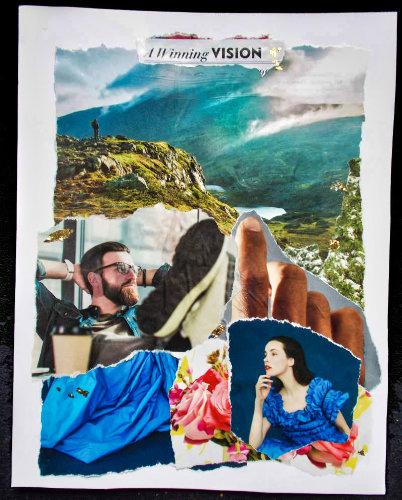 This morning’s collage is a deliberate enigma. Also, I’ve decided that – after yesterday’s efforts – it may be best to leave the meaning of the collage to the observer. After all, that was my initial plan for this series.

So, is he thinking of her (and perhaps the rustle of her blue dress), of the landscape, or something else?

Is she wondering about him, and is he the one that sent her flowers?

Does the finger point to what they’re both dreaming about?

Do their dreams – their visions – intersect? Or, is this very early in the relationship?

Or, do they even know each other… yet?

It’s definitely an “..in the eye of the beholder” kind of piece.

Things I learned, creating this collage:

The British editions of Harper’s Bazaar and Elle are on paper close to the quality of Nat’l Geographic. For collage, it’s worth spending extra for them.

When working with cheap paper, it’s best to apply the gel medium (adhesive) to the support rather than directly on the collage element. This makes element placement far more challenging, but it reduces buckling and bubbling… only slightly. (“Slightly” may be as good as it gets. So, I’m reminding myself that this shows the process in the finished art, and that’s okay.)

Some collages have a vision (no pun intended, with this work) from the start, while others – like yesterday’s piece – are a process.

It’s probably similar to the writing process: Some authors are “plotters” (plan the story, sometimes in great detail, ahead of time) but others are “pantsers” (writing with a vague idea, and making it up – flying “by the seat of one’s pants” – as they go along).

And sometimes, even the most dedicated, focused “plotters” suddenly find their stories going in a weird (but wonderful?) direction, and they go with it.

This collage started with a fairly clear vision, and then went slightly astray, but only slightly.