The good news is, the next announced sketchcrawl is October 16th.  I may organize one around Salem, MA.  It could be cool.

First, there was this:

– A key thing, help us spread the word!
If you are reading this, we are sure you have a number of friends that might be interested in this as much as you are. Tell them about SketchCrawl! Let’s share this idea with the rest of the globe. No borders.

Those sound reasonable enough, individually, but — in combination — they seem a little too much like corporate rules.

I did a quick check.  So far, the U.S. Trademark Database doesn’t show anything when I search for “sketchcrawl,” so the term “sketchcrawl” is still free to use without trademark-type restrictions.

However, it bothers me that I even thought to do that.

I may have to come up with a new word for these kinds of adventures.  I’m fine with giving the founder credit voluntarily, linking back to the official site, and so on, but… I dunno about this email from them.  Something in those rules feels a little hinky*.

Maybe it’s just the times, y’know?  Maybe I’m being hypersensitive. I’m seeing people staking out their own territory, trying to make money off things that were initially created to be free, fun and cool.  I don’t want to see SketchCrawls edging in that direction. It’d be like someone slapping a trademark on Earth Day.

*”Hinky” is a reference to a term used by one of my favorite characters in the TV show, NCIS, to indicate something that’s not quite right.   (No, I don’t usually watch NCIS. I don’t like crime shows.  However, the character in the show… she’s truly cool.)

When I create anything artistic, I feel good.  I’ve also noticed that my life goes better… I attract more good things into my life.

So, when Bob Proctor sent me this quotation this morning, I knew I wanted to turn it into a mini-poster and put it on my wall.

“It’s really important that you feel good.  Because this feeling good is what goes out as a signal into the universe and starts to attract more of itself to you.

“So the more you can feel good, the more you will attract the things that help you feel good and that will keep bringing you up higher and higher.”

Of course, that summarizes The Secret in three sentences.  However, whether or not you believe in The Secret, this is still a happy way to look at life and the world around you.  It’s empowering, on a deeply spiritual level… and isn’t that what creating and art are all about? 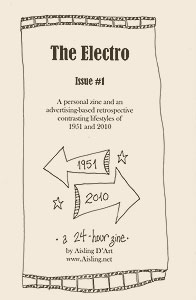 Fresh from the 24-Hour Zine Thing, here’s my personal zine… a 24-page zine created in 24 hours.

Well, during July 2010, participants had to go from concept to printed/bound zine in 24 hours or less, and the zine had to be 24 pages long.

We couldn’t prepare anything ahead of time.  We weren’t even supposed to think about what we might put into the zine.

It was exhausting, but I learned a lot!

(See my links at the foot of this article, for more information about the challenge, the process, and what I learned.)

Remember: This is NOT an art zine.  It’s a very rambling, personal zine reflecting my thoughts as I worked on this challenge.

To read (or print) your own copy of this zine

If you’re not sure how to print &/or assemble the zine, check this article: 24-Page Zine Layout

If you can print back-to-back, do.  That’ll save paper and bulk in the finished zine.

Read my happier summary (posted the following day) and see the contents of a 25th page (that didn’t fit in this zine) at 24-Hour Zine Thing – What I Learned.

The first time you try a zine layout, it can be confusing.

I’ve been creating zines for over 30 years, and I still sketch my zine layout on paper, to be sure I paste it up the right way.

Even if you’re creating a zine on a single sheet of paper, the zine layout can be baffling… especially if you’re highly dyslexic, as I am.

So others don’t have to reinvent the wheel, I’ve put several zine layouts online.  Here are a couple of them:

If you’d like to try a 24-page zine, or you’re trying to figure out how to assemble a downloaded PDF of one of mine, here’s that design.

Basically, your first page and last page will be on the same sheet of paper, and on the exact same side of the paper.

If you start with that and sketch it out, you can usually figure out which page goes where.

Zines aren’t rocket surgery or brain science — as the sayings go — but wrapping your right-brain orientation around a left-brain concept can be challenging.  I know.  I still pause and ask myself, “Did I get this right…?”

The good news is, you can create your own zine.  And, with a little double-checking to be sure your zine layout is right, you can happily publish your zine on your home printer or at any copy shop.