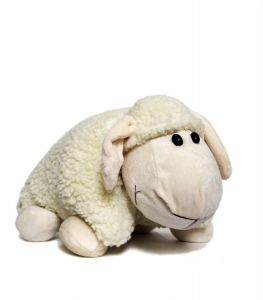 Not sure how to choose the right cloth doll stuffing?

The cheap stuff may look the same in the bag. It may even feel the same if you squeeze it.

You may think, “I’ll bet this is a no-name brand made by the expensive brand, and it’s really the same stuff (so to speak), for half the price.”

In terms of lumps in your doll (or your teddy bear), and how the batting holds up over time, there is only one way to go: Buy the best doll stuffing you can afford. You won’t regret it.

I like Fairfield and Mountain Mist stuffing and batting for my own dolls. I buy their top-of-the-line products, and I’m always pleased with the results. 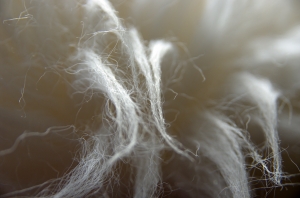 Right now, I lean towards Fairfield for doll stuffing, but that’s a matter of personal taste.  See what’s available in your local shops. As long as you’re buying a very good brand, and avoid their “bargain stuffing” (if they have one), try different kinds and see which suits your dollmaking style.

While we’re talking about cloth doll stuffing, remember to stuff your art dolls so the filling is tightly wedged into the doll. If it’s too loose, the doll will look lumpy after she’s been picked up, hugged, and otherwise played with for a few months.

For the best results, collect a variety of doll stuffing tools. One great tool is called a Stuff-It. It used to be sold by Dritz, but it’s hard to find now. It can be used to stuff teensy fingers, as well as turn nice corners.

If you can’t find that — and if you’re stuffing lots of tiny corners, fingers, etc. — you’ll fall in love with the Clover Stuffing Tool.  It’s not as generally practical as the Dritz Stuff-It tool, but for detailed stuffing, you’ll want to own the Clover tool.  It’s also ideal for turning itsy-bitsy cloth fingers.

Your dollmaking kit will also include a chopstick or two. The lacquered kind with the fine point on one end and a round or square end on the other, is amazingly handy. You may want to sand the lacquer with very fine sandpaper, so the lacquer doesn’t slip through the stuffing too easily.

If you do a lot of dollmaking, go to any arts & crafts store and select a few plastic tools intended for shaping clay.  You’ll be amazed at how handy they are, for turning and stuffing dolls.  I bought this set and I’ve used them for all kinds of arts & crafts projects… none of which involved clay.

The idea is to have tools that are pointy, but not too pointy for the job. If you try to use a pencil point, it invariably slips through the stuffing, leaving a lead-black mark that shows through the fabric. Ick. Getting pencil marks off fabric… well, it’s not easy.

Likewise, trying to stuff with scissors results in unexpected holes when the scissors slip, despite your best intentions and efforts at control.  (Yes, I cried when it happened.)

How much doll stuffing to buy

Buy great doll stuffing. You’ll need at least two or three times as much as you think, looking at the bag. It will compress to about one-quarter its original size. Or more.

I usually buy a one-pound bag for a normal, happy teddy bear.  That same bag will fill at least half a dozen sock dolls, and several medium-sized dolls.

Even from the start, the doll just won’t look quite “right.” I don’t know why, as the stuffing’s weaknesses usually doesn’t show up right away. But I learned quickly; cloth dolls (and teddy bears, and other stuffed figures) don’t look as good if the doll stuffing isn’t top quality.

If you have to cut corners, select a budget fabric rather than purchase cheap stuffing.  (See my article about preshrinking fabric for fabric advice.)

Buy the best cloth doll stuffing, and your dolls will thank you for it.

Here’s one that I recommend:

I’m using this in my current cloth dolls and figures.  It’s easy to handle, holds its loft well, and — with a Stuff-It tool — it wedges nicely into tiny corners.

It seems to wash well, so I also use this for a trapunto effect (stuffing details separately, through concealed openings in the fabric) in my other fabric art.

Because this stuffing holds up well and remains fluffy, it’s a good choice for large dolls and stuffed animals that a child will use as a pillow.

You can find it at most fabric stores, or order it through Amazon.com. (That link takes you to the one-pound size that I buy.)

Articles at others’ websites:

Tips and Tools for Creating Soft-Sculptured Dolls by Miriam Gourley.

Have a question or a helpful tip?  Leave your thoughts about cloth doll stuffing in a comment, below.

5 thoughts on “Cloth Dolls – How to Choose Your Doll Stuffing”