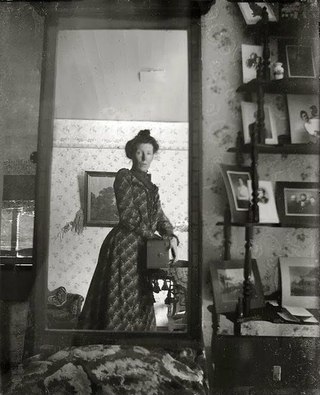 The search for the earliest “selfie” (self-portrait, as a photograph) seems to be at full tilt.

One of my favorites is (supposedly) dated around 1900.  It’s shown at the right.  The largest version I can find, online was posted by Sabine Niedola.  (The largest, clear image is usually the first – or one of the first – posted online, and I like to give credit to the person who first found it.)

Frankly, the subject’s features look a lot like my own portraits from the 1980s. I’m also pleased to see her hairstyle. I’ve tried that kind of style – even with ultra-thick hair – and it turned out the same as hers.

So, I wasn’t alone with the “pouf” issue. (I know about “rats” – long, sausage-shaped supports hidden under the hair – for better-looking versions of this style. I just wasn’t that committed to the style.)

Note: Since I posted this, my friend David Locicero pointed out authenticity issues. This may be a hoax or a cosplay photo.

Something looks a little like an outlet, on the lower right side of the photo.  I’m not certain it’s an outlet, but it might be.  I don’t know enough about household hardware from the early 20th century, to be sure.

My bigger question is about the matted photos on the shelves. The double-matted pictures are more consistent with modern-day presentations. In the past, someone who could afford that kind of matting would have framed the photos under glass.

There’s also the question of the light fixture (if that’s what it is) on the ceiling in the reflection.  And, the high quality of the mirror reflection.

But, whether it’s an authentic photo or not, it’s not the earliest “selfie.”

One in the running is a self-portrait by photographer Robert Cornelius.  He’s the dashing young man in the photo on the left.

The fashions are, of course, post-Regency, but I still see a little Colin Firth / Pride and Prejudice in that photo.

Ah, if time travel were possible…! (If he came through a time portal, like in Kate and Leopold, I’m sure many women would swoon.)

For good reason, he’s been featured as Victorian Hottie of the Week.

According to some, that’s his own photo from around 1839. Others simply say it’s the first actual portrait photo… taken by an unknown photographer.

It’s difficult to tell.  Many websites give a nod to the Top 25 Most Ancient Historical Photographs as the source of Mr. Cornelius’ picture, and that site says it’s a self-portrait.

You can learn more about him at this FindMyPast.com.au article, Historical ‘selfies’: in search of the world’s first self-portrait photograph.

Then there’s the Russian Grand Duchess Anastasia’s self-portrait, on the right, dating to 1913 or 1914.

The Daily Mail featured the picture in a really nice article.

Nevertheless, I’m intrigued by the white blurry image in back of her.  Online, that’s sparked some discussion with no firm conclusions.  Very cool.

If you enjoy old self-portraits like these, visit Google or any search engine and look for “oldest selfies” and “earliest selfies.”  You’ll find plenty, right now.  (I’m not thrilled with the term “selfie,” or that it’s the Oxford Dictionaries Word of the Year for 2013, but if you’re looking for early self-portraits, the term makes online searching much easier.)

Just watch out for faux historical selfies, created with the aid of Photoshop.