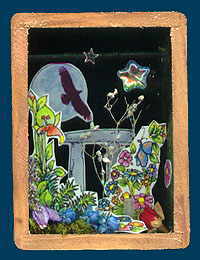 This is a pocket shrine, created for a shrine exchange hosted by Patty Harrison in the UK, September 2000.

This box represents the “other” world. It’s the fantasy land of the faeries. In legends, it’s a world similar to ours but also different.

The black sky represents the darkness people travel through to reach this land. The flowers (painted, and dried, natural flowers) are part of the dazzling beauty of this fairy world.

The dangling opalescent star is what gives the shrine movement and life. The small bit of quartz crystal in each box represents “magic” in everyday life, which we add in our own, unique ways.

How each one was created

I started with small wooden boxes, purchased at the local fabric store, JoAnn Fabrics. They’re each about four inches tall and have a removable lid with a star cut in it.

I stained the outside of each box to a light oak color, and added color stains using a stencil that I cut in a five-pointed star shape.

The inside of the lid is painted with gold. Inside the box, I used a moss green shade of Lumiere paint. The back of the box is lined with black plush velvet, which I glued to and wrapped around a cardboard base, before gluing it in place with Aleene’s Tacky Glue.

Then I drilled holes in the sides of the box, inserted part of a bamboo skewer (from barbecue supplies) and painted it matte black, so it’s sort of like a rod in a closet.

In the very back, I have a moon-and-black-bird image that I created for one of my websites. The bird represents the Morrighan, of Irish mythological history. She is one of the Tuatha De Danann, also called fairies.

Next, I drew a dolmen, and painted it with watercolor. Both this and the moon/bird images were scanned a printed on shiny photographic paper, which I trimmed neatly before gluing the images in place on the velvet.

The flowers and elements of the green world were drawn with a zero point Rapidograph, and painted with Dr. Ph. Martin’s concentrated watercolors. These were scanned and printed on a heavy matte paper.

These pieces (two per shrine) were glued, diorama-style, using tabs I left on the sides of the art, when I trimmed it.

Next, I trimmed and glued bits of moss and dried natural flowers in the shrines. I used Aleene’s Tacky Glue for this.

Then, I added one small quartz crystal in each shrine, slightly hidden in the greenery.

(The black rod conceals the topmost edge of the moon, in this scan. The rod is visible in the real shrines, but does not generally obscure any of the images.)

The outside of the box was highlighted with gold, and varished using a glossy polyurethane finish.

I made a total of eleven of these shrines.

Four went to the exchange, three are kept in our family, three were sent to “four creative somethings*” subscribers who requested them.

The remaining one was sold to a collector at Artfest 2001.